A quick google search for "nutrition 101" or "nutrition simplified" yields so few to-the-point, easy to understand primers. Let's change that.

We're believers in the 80/20 principle, so let's focus on the high-level keys to nutrition: macronutrients... what they are, and why they're important.

The quick and dirty:

Macronutrients ("macros” for short) are the building blocks of your diet—carbs, proteins, and fats. They give you the energy to work, exercise, and not fall asleep during those boring meetings. They all work together to keep you going: carbs for quick energy, fats for slowing carb absorption & keeping blood sugar in check, and proteins to sustain your energy.

Let’s take a closer look at each macronutrient:

We all know at this point that sugar - a type of simple carb - is a big NO NO. What's troubling is that a lot of foods (and snacks) that many people perceive to be healthy are in reality loaded with sugars. Hint: always check the nutrition label for sugar levels :)

Where a lot of people trip up, though, are with other refined carbs, namely processed versions of whole-grain foods. These processed foods include the likes of non-whole grain bread or white rice, and are considered bad because your body is unable to distinguish this type of simple carb from sugar as a simple carb. Long story short, your body processes many breads and refined carbs the same way it processes sugar. You know sugar is bad... beware of other refined carbs!

Called “complex” because the molecular structure is formed by long, complex chains, complex starchy carbs are often what people think of when they refer to “carbs” in general. These include foods such as brown rice, whole wheat, whole grains, potatoes, etc.

Now, many of these foods are packed with vitamins, minerals, and fiber; however, often times, what we end up eating are refined versions (anything with white flour, e.g. white rice or white bread) of these foods.

These are the “best” types of carbs. Loaded with fiber, which your body is unable to absorb and thus passes through the digestive system, vegetables are the most common source of complex fibrous carbs. Yes, you heard that right… vegetables are carbs! But because your body is unable to digest the fiber, these versions of carbs are as healthy as they come and play a crucial role in keeping your digestive system running healthy!

IMPORTANT "ah hah" moment: Your body breaks down food into glucose, which it then uses for quick energy. However, your body only needs so much glucose at once, and ends up storing the excess as glycogen in your muscles and liver for later use (typically to maintain blood glucose levels during aerobic exercise). If these glycogen stores don't get depleted, over time they turn into fat cells! In short, your body first uses glucose for energy, then it turns to glycogen stores, then finally fat stores. It's a cascading pattern where excessive simple carb intake (which quickly becomes glucose) prevents glycogen stores from being sufficiently depleted and thus never allows the body to use fat stores for energy. Hopefully you can now see why consuming excessive simple carbs is so detrimental to shrinking that waistline!

Proteins are complex molecules made up of strings of amino acids – tiny molecular compounds that play a vital role in your body’s structural and metabolic processes, among other things. There are 20 amino acids, of which 9 are considered “essential,” meaning the body is unable to produce them naturally. That said, we rely on food that we consume to fill this void.

Because protein plays such a large role in building and repairing muscle and tissue, people who are particularly active especially need to get sufficient protein to rebuild muscle that gets broken down during exercise. In addition to muscle and tissue repair, protein plays an important role in hormone regulation, enzyme manufacturing, and immune health. Protein also helps you sustain your energy throughout the day!

High-protein foods include meats, beans, nuts, seeds (and of course, our snacks are loaded with protein!)

First off, fats don’t make you fat. In fact, eating less fat than recommended can lead to consuming MORE sugar/simple carbs than recommended, thus starting a negative cascading effect that can undermine your wellness and nutrition goals. Fat plays a large role in keeping you satiated and helps improve brain function, while also playing a key role in vitamin absorption.

These are the good ones! Typically found in foods like avocados, fish, nuts, olive/peanut/canola oil, and seeds, unsaturated fats are liquid (at room temp) and can, among other things, improve cholesterol levels and aid in inflammation.

Typically found in animal foods such as cheese, meat, and milk, or in “tropical” oils such as coconut oil or palm oil, there’s debate around the health implications of saturated fats. But, as a rule of thumb, you’ll likely want to limit intake of them, and replace with healthy unsaturated fats instead (and certainly NOT replace with simple carbs).

Trans fats are bad! Most typically found in fried foods, baked goods, and processed snack foods, trans fats have been shown to raise the bad type of cholesterol (LDL) and lower the good type (HDL). They’ve also been linked to heart disease, stroke, and diabetes, and can contribute to insulin resistance. Rule of thumb: stay away!

How much should I have of each?

A good macronutrient balance for main meal is 40-50% net carbs, 25-35% proteins, and 15-30% healthy fats. It is recommended that a healthy snack try to mimic this same macro breakdown, and all our snacks are designed with this in mind :) 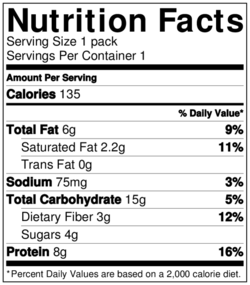 (This is the nutrition label for our snack Bananas for Chocolate)

We hope you enjoyed this nutrition primer and learned something new about macronutrients! The key is to start understanding the macro composition of what you're putting in your mouth - being more aware and INFORMED is 90% of the battle! And of course, all our healthy snacks are loaded with the goods (proteins and unsaturated fats) and are low on the bad (sugar & other simple carbs).

Check out our snacks